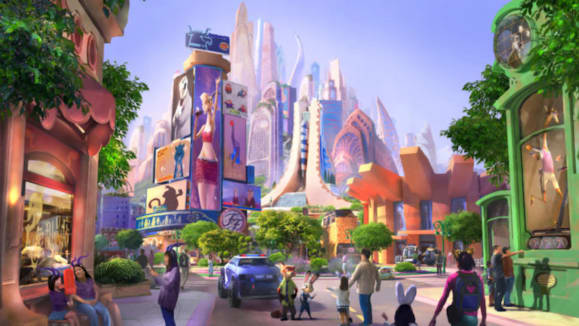 Construction of the new Zootopia themed land in Disneyland in Shanghai is now underway! The anticipation is already starting to build with artwork depicting the silhouette of Zootopia from the movie popping up on the walls lining the construction projects boundaries.

This is the first and so far only announced Zootopia themed land at any of the Disney theme parks so Disney enthusiasts have to plan a little better for this one because tickets are expected to go fast once construction is complete.

An announcement from Disney about the new addition to the park states “Guests will be invited to experience the mammalian metropolis of Zootopia ‘where anyone can be anything,’ with a new major attraction that will seamlessly blend Disney storytelling and state-of-the-art technology to bring this fan-favorite movie and its characters to life — including Judy Hopps and Nick Wilde.”

Zootopia will be the eighth land added to the theme park and the second major expansion since they opened back in 2016.

“The rapid rate of expansion at Shanghai Disney Resort demonstrates our confidence and commitment to the company’s future development in China,” said Bob Chapek, chairman of parks, experiences and consumer products at The Walt Disney Co.

What Other Attractions are at Disney, Shanghai?

It’s no surprise that Disney in Shanghai is adding Zootopia to its arsenal of fun things to do while you visit the park. Zootopia is the number one animated film in China’s history, making $236 million at the country’s box office. This fan favorite film was destined to be a staple in Shanghai’s Disney attractions.