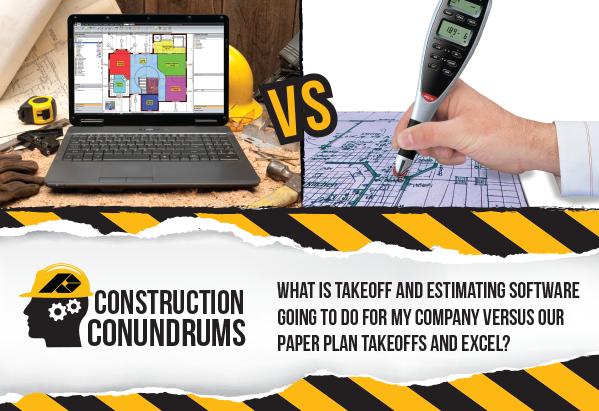 What is Takeoff and Estimating Software going to do for my company versus our paper plan takeoffs and Excel?

Most contractors that are still doing manual takeoffs on paper plans trust their quantities over takeoff and estimating software because this is the method they’ve always been using. A lot of contractors actually don’t think that takeoff and estimating software will improve their work at all. We’ve all heard the term, “If it’s not broke don’t fix it.” You could argue that point with your manual methods on takeoffs. We are not saying that doing takeoffs by hand is “broken”, but in this era of vast improvements to industrialism and technology we have to look at where the industry is headed. Putting together an estimate takes time. If you are awarded a project, that time was well spent. If you are not, you pretty much wasted your time. What most don’t realize is that software could change their company for the better in just a matter of hours. Would you turn down the chance to improve your business overnight?

What can you gain by switching from paper plans to an estimating software?

There are many additional advantages of using takeoff and estimating software like reduced overhead and better control of material cost, but the main point in purchasing this type of software is that it could potentially be one of the most valuable tools for your company to utilise that you would ever buy. Let a takeoff and estimating software simplify your life, your work, save you precious time, and most importantly make you money. 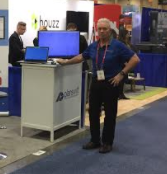 since 1991. When he started in the industry he was building relationships with contractors all over the country selling various construction software products. Primarily he would sell Timberline (Sage), Proest Software, and GTCO Digitizer products that were a staple in many contractors offices in the 1980-90’s and 2000’s.

When Proest sold their Takeoff program to iSqFt earlier in 2010, Mike decided to contact PlanSwift to see how he could sell the program. By this time many of his potential sales were lost to PlanSwift and that made him wonder “where did these guys come from”. PlanSwift started to show up everywhere and they seemed to be taking the industry by storm. He worked as a direct employee from then on and now 4 1/2 years later, PlanSwift is still the best takeoff and estimating program for the money in the industry.