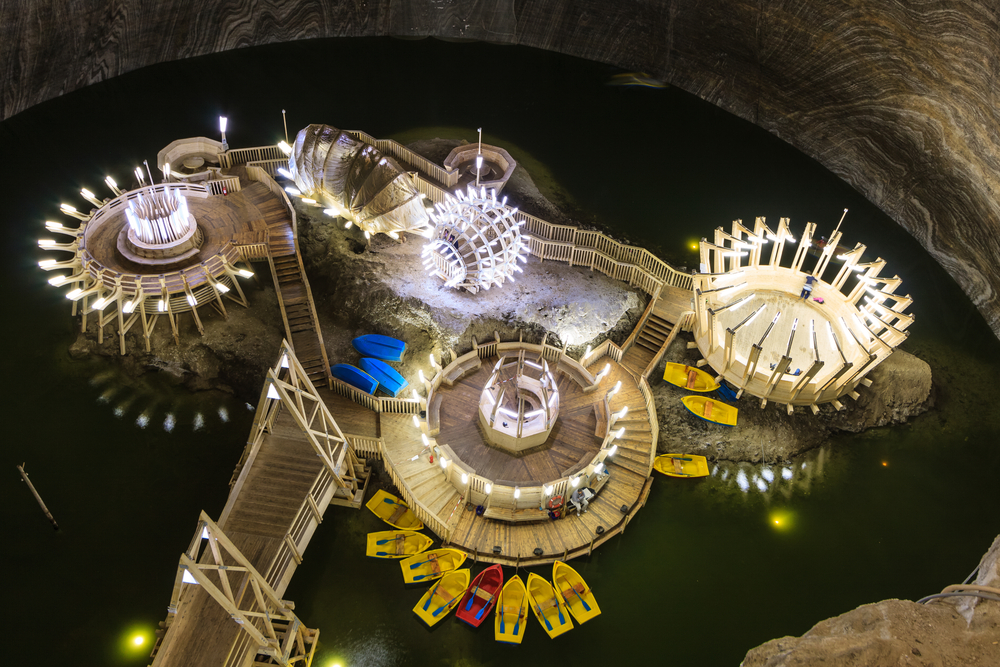 An ancient salt mine in the Transylvanian countryside has turned into an interesting and unlikely tourist attraction, an underground amusement park. Salina Turda will be a completely unique experience for anyone willing to take the trip to experience all it has to offer.

Salina Turda was designed by a group of Romanian architects that turned two vast mines, the biggest in the area, stretching 90 metres high into an incredible new attraction. Activity in this mine ceased in 1932 and since then it has been a myriad of different things.

In World War II it was used as a shelter and even a cheese storage center but in 1992 it reopened as a visitor attraction which helped cement it’s transformation into a museum and theme park 16 years later.

The original elevator built into the centuries old vertical shafts are used to lower the guests into the theme park 120 meters down into the earth. On the way down, guests can enjoy the picturesque views of the shimmering walls and salt formations in the mine.

“I am often drawn to contradiction in my work, where the heroic, idealistic, or epic meets mundane reality. Salina Turda embodies this idea particularly well. It is an undeniably beautiful historic monument of engineering and human endeavor, but it is now used as a theme park with ping pong tables, bowling, and boat rides’,” said Richard John Seymour, a Romanian architect.

“This juxtaposition raises questions about the value of the architecture and space today, in relation to its historic value,” Richard John Seymour continued in his interview.

Over 2 million tourists, mostly Romanians, have visited this unique cave primarily for health reasons and historical value but they are expecting many more tourists with their new and exciting attractions.