How  Augmented Reality is Changing the Future of Construction 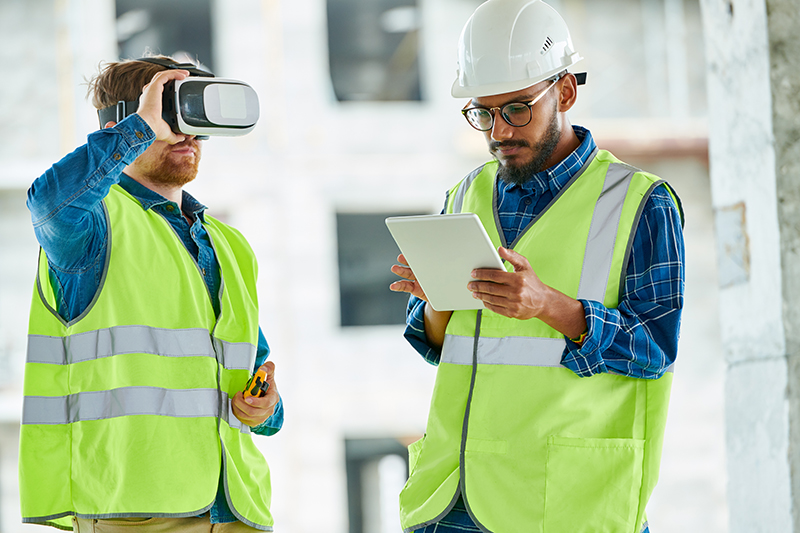 How Augmented Reality is Changing the Future of Building

Augmented Reality (AR) may be a relatively new technology, but many in the construction industry are excited about its potential to help streamline and keep projects on schedule. For architects, engineers, designers, and project managers, this interactive tool promises to increase accuracy, improve collaboration, reduce errors, and save precious time, money, and resources.

If you’re unfamiliar with AR, it is the layering of computer-generated elements like sound, graphics, or video over a real-world environment. This same technology has been used in video games for years. Now, it is generating buzz around how it can improve the construction project lifecycle. For example, a contractor could drive to a jobsite, put on AR glasses, ask to see a report, and a display pops up showing items that need attention.

How big is the AR market? Various research groups—from Business Wire to Grand View Research—have predicted the AR market will grow to between $60 billion and $100 billion by 2024. No doubt, they see advancements in 5G, artificial intelligence, and robotics as fueling this growth.

How AR Will Impact Construction

Many believe AR has the potential to be integrated into almost every part of the construction industry. From the design side to the jobsite, here are groups who can expect to experience a positive impact from using AR:

While architects and designers use AR in an office, it can also be used on the jobsite to see through walls and understand the path of the technical installations. As mentioned, AR can provide a unique perspective of the jobsite and improve the quality of projects. For example, with AR glasses, a user could walk through a jobsite, taking photos and compare them to older photos – without lifting a finger.

Like Virtual Reality (VR), AR creates a new and independent environment for users to work in. While VR creates an entirely new virtual world, AR is different in that it creates the virtual elements that interact and react with things in the physical world.

With AR, a 3D model is created and combined with all the building data. Then, users can wear an AR device that orients to their point of view. As such, the building data will be displayed digitally over the user’s physical surroundings in real-time.

Perhaps the main benefit is that AR users can gain a more accurate view of what is being built. Its ability to overlay data onto real-world environments so users can see what is not yet built, or what is hidden, holds the most promise. This can include all the layers of materials and installations that were previously difficult to comprehend on paper. Now, this data is more easily accessible on the virtual model of the project using projected holograms.

For example, AR is used on the jobsite for geo-locating where future objects and structures will go. This means you can “see” hidden elements like underground pipes, cables, and ducts hidden behind a wall, or boundaries for outer walls. AR is also used is to map a user’s exact location using GPS and then overlaying BIM information. In this example, you can visualize the finished project and see where columns and foundations will eventually go.

Wearing an AR device, a user can see real-time data geospatially as they walk through the building space, updating and displaying the necessary information. Information displayed can include schedules, operational details, and structural plans so the user can automate the construction process and make decisions on the site.

Another win-win? AR is not predicted to replace workers in the field as it can be used to enhance how workers and digital machines come together.

What’s Available on the Market Today

To access all of AR’s capabilities, users must wear a device like VR glasses. Many different companies manufacture AR hardware, but the most popular device used in the construction industry is the Microsoft HoloLens, which is now certified as basic protection glasses.

Other devices on the market include:

Ironing Out the Bugs

The drumbeat for better and faster construction has been steadily growing louder over the last few years. What’s holding back AR from playing a bigger role in construction? For starters, it’s a relatively new digital technology that has its limitations and reliability issues.

Many construction companies recognize that AR has great potential but feel there’s not enough research to take it more seriously. In fact, a 2018 survey by the UK firm GlobalData showed only 29 percent of respondents had invested in AR. Also, slightly more—32 percent—said they had yet to invest but planned to do so within the next two years.

Admittedly, many AR systems available on the market today still have a few bugs. One potential pitfall is that incomplete or out-of-date information could result in mistakes or accidents if the app displays the wrong location of a hidden pipe or cable. Another hurdle to overcome is the limited ability of AR apps and devices to provide reliable positioning information of the user moves around the jobsite. Most of these apps currently use GPS positioning, but have trouble pinpointing a location (it’s only accurate to within several feet). It also tends to lose its signal if blocked by weather or a neighboring structure.

“We have to somehow find a way to display the information to the user in such a way that he knows what he can rely on,” said Stephane Cote, the research director at a building information modeling (BIM) software developer. “For instance, it could be color coded. If the pipe is green, it could mean ‘Yes, that’s fine, you can rely on that. We surveyed that pipe last year, it is exactly at that location.’ If the pipe is red, it could mean ‘Okay, that pipe is on that street, that’s all we know. It could be anywhere.”