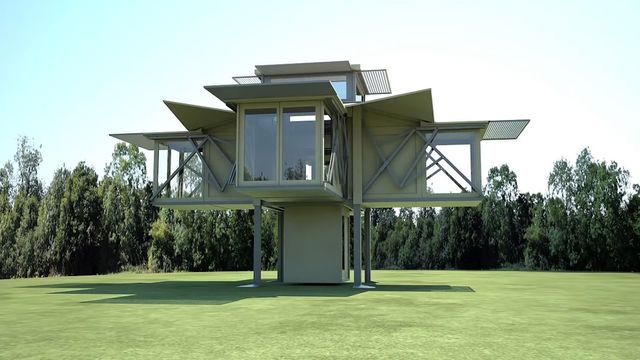 uBox is an incredible machine created by the United Kingdom firm Ten Fold Engineering. It has the ability to transform itself from a complete home down to a shipping container like structure for easy transportation.

Each of these portable homes uses a patented lever system that moves the different parts of the structure simultaneously to unfold the home. Once condensed these homes can be stacked on top of one another for transportation or storage. The homes are sealed when packed away so you can store things inside of them when transporting them.

Once put together, the internal walls can be moved and arranged according to the owner’s preference. They also have to potential to be stacked and to go fully off-grid by way of solar panels. They self deploy in just 8 minutes using very little power.

These structures fold out to three times its size when transporting to 64 square meters or 689 square feet. There’s even 20 square meters, around 215 feet, of storage space for furniture or other equipment you might need while in transit. These structures can cost upwards of $129,000 each but the company doesn’t consider itself to be in conflict with traditional housing methods.

“In our new world, we need agility because things change all the time. Nothing else can be moved at the speed that modern life demands. The question was: ‘Can you actually get something that is big enough to be useful, to work in and and carry the things you need?’ We tried to develop something that could be transported using traditional systems like trucks; that could unload without cranes or workmen; and that could be done in minutes, so you didn’t lose any time.”

Though the design was initially just for homes, the structures can be used as offices, shops, restaurants, or exhibitions. The flexibility is crucial, Martyn said.

“You could have it up on a mountain in the winter and on the beach in the summer,” he said. “I know that sounds like just a rich person’s thing, but it isn’t. A school could have a classroom in one place during term time and elsewhere during summer. There’s more opportunity for more people, and less redundancy and waste.”